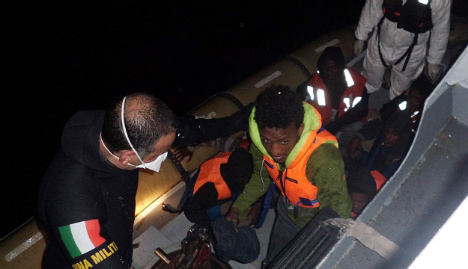 The boat, with between 400 and 600 people on board, was spotted in the night by a Danish ship south of the Italian island of Lampedusa and in waters between Libya and Malta.

The Maltese military was immediately alerted and requested assistance from Italian coast guard to help rescue the asylum-seekers from the wooden 25-metre (82-foot) boat.

Two other merchant ships passing by were also scrambled.

Two of the migrants were evacuated by helicopter to hospital in Palermo in Sicily in a serious condition.

The survivors are being taken to Italy, while the bodies of the victims are expected to arrive in Malta on Sunday.

Meanwhile a merchant vessel, the Panamanian-flagged City of Sidon, arrived in Porto Empedocle port in Sicily on Saturday with 61 migrants on board — the survivors of another shipwreck tragedy close to Libyan waters.

Their boat was found on Thursday 36 nautical miles north of Tripoli and it sank as they were being rescued with 102 people on board, meaning that 41 are feared dead.

The survivors were from Gambia, Ghana and Mali.

Another merchant ship, the Liberian-flagged Jamila was also headed for Porto Empedocle with 206 migrants on board. A navy warship also on Saturday arrived in the port of Salerno with 2,186 migrants rescued in recent days, hailing from Egypt, Eritrea, Ghana, Somalia and Syria.

The navy said on its Twitter account that a second warship had begun another rescue of a migrant boat south of Lampedusa, which is Italy's southernmost point and is closer to the African continent than mainland Italy.

There has been a sharp rise in migrant landings in recent weeks because of the calm summer weather and growing lawlessness in Libya, with hundreds of migrants now being intercepted by Italian authorities every day.

Around 80,000 migrants are now believed to have landed in Italy so far this year — higher than the previous record of some 60,000 arriving in 2011 at the height of the turmoil triggered by the Arab Spring revolutions.

"The conditions of these journeys are becoming ever more perilous and are killing dozens of people every day," Carlotta Sami, a spokeswoman in Italy for the UN refugee agency, said on the public news channel RaiNews24.

"Over the past 48 hours we have seen uninterrupted rescues by merchant vessels, military ships and the coast guard. There is a huge number of boats on their way," she said.

The centre-right opposition has accused Prime Minister Matteo Renzi's centre-left government of failing to tackle the problem head on and get more European assistance.

"The government is powerless and keeps taking in illegals. It's a costly, endless shame," said Maurizio Gasparri, a senator for Silvio Berlusconi's Forza Italia party.

"The EU has tricked them," he said.

Most of the migrants come from Eritrea, Somalia and Syria but there are also asylum-seekers arriving from Afghanistan, Pakistan and other parts of Asia as well as sub-Saharan Africa.

Thousands have died in the crossings, either by drowning, dehydration or being suffocated by toxic fumes.

Earlier this month, Italian officials discovered the bodies of 45 migrants in the hold of a fishing boat, where they appeared to have suffocated after being locked in by traffickers.