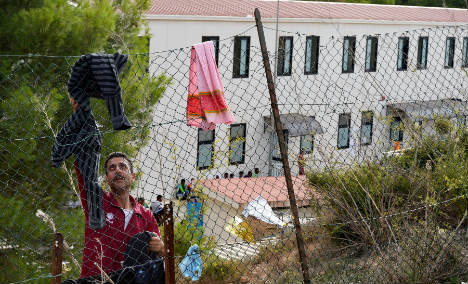 The navy on Friday said it had rescued 574 from one boat, and the coastguard said it intercepted 251 on another.

A boat laden with 352 migrants — mainly from Eritrea, Somalia and Syria — also arrived on the island of Lampedusa, managing to avoid detection.

A second smaller boat came later with 94 migrants on board.

All the arrivals together would bring the number arriving on Friday to 1,271 people according to an AFP tally.

The charity Save the Children said there were now 1,278 migrants on tiny Lampedusa alone, which is Italy's southernmost point and is closer to Africa than to the Italian mainland.

The asylum centre on Lampedusa "is not suitable to host the migrants. They have to be transferred immediately to adequate structures," the group said in a statement.

Migrants are usually taken to other ports in Sicily because of heavy overcrowding in recent years on Lampedusa — the main gateway for illegal immigration into Europe.

The navy said it had intercepted a total of 3,510 migrants over the past two days as part of "Mare Nostrum", a large-scale naval deployment that was begun after twin shipwrecks in October in which over 400 migrants died.

The Italian news agency ANSA also on Friday said the coastguard had received information from migrants rescued by a merchant ship on Thursday about a possible shipwreck.

The accident apparently occurred a few hours after the boat left Libyan shores and the migrants were reported saying that around 60 people may have drowned.

Shipwrecks are common in the crossings because the boats are often fishing vessels inadequate for longer sea voyages and because they are usually overcrowded.

Tens of thousands of migrants have landed on Italian shores so far this year and the number is expected to soar past the record 63,000 set in 2011 during the Arab Spring uprisings.