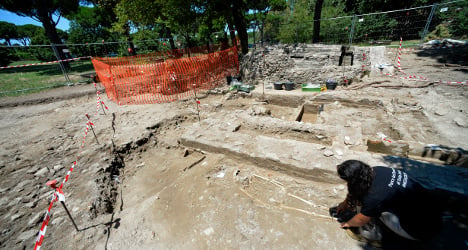 A student works on a skeleton at the excavation site in Ostia Antica. Photo: Andreas Solaro/AFP

Ostia "was a town that was always very open, very dynamic," said Paola Germoni, the director of the sprawling site – Italy's third most visited after the Colosseum and Pompeii.

"What is original is that there are different types of funeral rites: burials and cremations," she said this week.

The contrasts are all the more startling as the tombs found are all from a single family – "in the Roman sense, in other words very extended", Germoni said.

The discovery is the latest surprise at Ostia after archaeologists in April said that new walls found showed the town was in fact 35-percent bigger than previously thought, making it bigger than ancient Pompeii.

Ostia, which was founded in the 7th century BC and is believed to have covered an area of 85 hectares, was once at the estuary of the Tiber River and is now about three kilometres from the sea because of silting.

The place where the latest burials were found is inside a 15,000 square metre park close to a Renaissance castle on the edge of the main excavated area of the town, which had docks, warehouses, apartment houses and its own theatre.

The port was founded by Ancus Marcius, the fourth king of Rome, to provide his growing city with access to the sea, ensuring it would be supplied with flour and salt and to prevent enemy ships from going up the Tiber.

Around a dozen tombs have been found so far at the site, some of them including lead tablets with inscriptions containing curses to ward off potential looters.

The cemetery "shows the free choice that everyone had with their own body, a freedom people no longer had in the Christian era when burial became the norm," Germoni said.

The latest excavations, which began in 2012, have also revealed an aristocratic home with a polychromatic floor.

Thirty students from the American Institute for Roman Culture are also taking part and could be seen at work under the cypress trees next to the ancient basalt-block Roman road that once connected Ostia to the capital.

Hailing from Canada, Switzerland and the United States, the budding archaeologists were spending a few weeks in Rome on the dig as part of their studies.

"It's a dig that is very rich in different experiences," said Darius Arya, a US archaeologist who heads the institute.

They "are discovering restoration work but also a more anthropological approach with excavations of tombs," he said.

Among the students was Michal Ann Morrison from Austin, Texas in the United States, who is completing a degree in religious studies.

"You get to deal with tangible objects from history, which is really exciting," she said.

"I worked as the artifact intern for this year and it's an exciting position because you get to get your hands on all the coolest stuff."