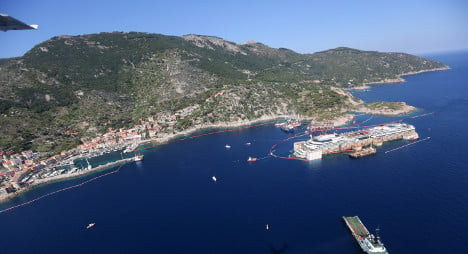 Ship owner Costa Crociere has promised to clean up the shipwreck site and return the island to its original condition. Photo: Protezione Civile Italiana/AFP

The liner crashed in January 2012, toppling onto its side and sparking a panicked evacuation of the 4,229 people from 70 countries on board – many of whom were sitting down for supper on the first night of a Mediterranean cruise.

Wet and scared, many were taken in by locals who fed and clothed them or spent the night in the local parish church drying themselves with the priest's vestments.

The rusting hulk has been stranded on Giglio ever since, scaring off holidaymakers but attracting divers and engineers from all over the world who have spent 30 months on an unprecedented project to right, refloat and remove the ship for scrapping.

"Instead of tourists in flipflops and swimming costumes, we had men in hard hats, life vests and dirty overalls at the portside cafes and restaurants," he said.

Hundreds of workers shuttled back and forth daily from salvage platforms and tug boats to the port, where they could drink beer in the morning after a night shift or relax with a game of table football after dinner.

Grinning British, Dutch, Italian, Spanish and US engineers in their grey and orange overalls stare down from the walls of restaurants, photographed in bear hugs with the owners or tucking into steaming plates of seafood pasta.

"The accident finally put Giglio on the map," said Gertraud Lang Schildberger, an Austrian-born 71-year-old who has lived on the island with her Italian husband since 1968 and runs an apartment rental company in the port.

"These young men who speak all kinds of languages have internationalised the locals, even changing what we eat and drink. Some restaurants added foreign dishes to the menu and we got special beers and liquors in for them," she said.

The local economy got a boost as well: hotels, restaurants, shops and bars which used to open from March to October for the tourist season stayed open all year around to provide for the salvers and visiting relatives.

But not everyone has profited. The number of holidaymakers has dropped 25 percent in the two seasons since the shipwreck, to 115,289 people last summer.

Lush green paths dotted with fruit trees and wild flowers along the hillsides are now largely abandoned and locals say a premium diving site has been ruined.

"Right underneath the crash site there is an underwater grotto which glows red when you illuminate it. Scuba divers came all year around to see it, but it will be years before whatever is left can be visited," barman Cristiano said.

Ship owner Costa Crociere, Europe's biggest cruise operator, has promised to clean up the shipwreck site and return the island – which lies in the Tuscan archipelago, Europe's biggest marine park – to its original condition.

From his beach-side office overlooking palm trees and an emerald sea, environmental biology professor Giandomenico Ardizzone has been monitoring marine life in the area since the crash and will oversee the clean-up operation.

A two-year project will remove the vast underwater steel platforms, 21 metre-thick pillars and 16,000 tonnes of cement-filled sandbags used to
support the ship, before sediment created by the salvage is sucked off the seabed.

The battered ship leaves behind a legacy of scientific discoveries "of enormous importance, from studies into little-known species to a unique look at the impact of such an accident on marine life," he said.

'Tears into the sea'

The technological advances made during the unprecedented salvage – from new underwater drilling techniques to the world's largest computer model, used to simulate the refloating process – will go on show in a new multimedia centre on Giglio.

Italian salvage expert Neri, which helped remove the fuel from the beached Concordia in the wake of the disaster, is dedicating a statue to the island of a man gazing out to sea holding a boat – a homage to the 32 people who died in the disaster, as well as those the islanders helped save.

Divers from the US-Italian partnership Titan Micoperi, which raised the ship, will be the last to go, after removing the scaffolding from the sea bed.

Some may be back: heavily-tattooed master diver Yurgi Bean, who has worked on oil and gas platforms in Egypt, Iraq and Mexico, said he "loved the life on Giglio" so much he has requested residency on the sun-drenched island.

He is one of many cheerful, strapping workers Lang Schildberger will miss.

"We'll be crying tears into the sea when they go," she said, her eyes already brimming at the thought.