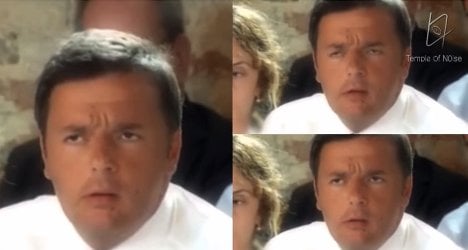 Prime Minister Matteo Renzi has been trying to improve his English. Screenshot: ChristianIce/YouTube

Since moving to the lofty heights of the premiership in February, from his mayoral seat in Florence, Renzi has been working on his linguistic skills.

His latest chance to impress came at the Digital Venice conference earlier this month, when the prime minister burst into a English-language monologue about the Berlin Wall.

Unfortunately, much of the rest was lost in translation, with a smattering of “umms” coupled with Renzi’s famous furrowed brow.

Shortly after the session paused for lunch – a point happily announced by Renzi in English – a video appeared on YouTube offering a phonetic translation of the prime minister’s prose.

The video has proved popular with Italians, gaining more than 880,000 views, and is also battling for popularity against a remix of Renzi’s speech.

The maker of the second video, titled Shish is the Word, has cut the prime minister’s incomprehensible words into a catchy jingle. The creation comes complete with scenes from the film Grease and TV series Family Guy, juxtaposed against Renzi’s puzzled face.

The remix video has so far been viewed around 1.2 million times, giving an unintended boost to the politician’s online profile.

Renzi is unlikely to be deterred, however, having already publically tested his English on John Kerry, the US secretary of state, and President Barack Obama.