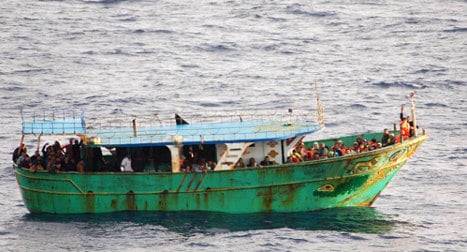 Twenty-nine people also died of suffocation after being forced into the boat's hold, the Italian news agency ANSA reported. Aid organization Borderline Europe told The Local that this is not the first time migrants have reportedly been deliberately killed on overcrowded boats, but that this appeared to be the worst case so far.

Sicilian police said in a statement on Tuesday that they heard of the allegations from migrants rescued in the boat disaster off the Sicilian island of Lampedusa on Saturday.

Survivors told police that a fight broke out when those kept in the hold searched for room on the packed deck. In order to keep the migrants below deck, the traffickers allegedly stabbed 60 before throwing their bodies into the sea.

Police said the passengers in the hold were "driven by desperation" and so forced open the door and climbed onto deck,  "where the tragedy occurred".

Dozens more migrants, including a two-year-old child, are feared to have drowned as they were transferred to a Danish freighter from the fishing boat, which is said to have been carrying between 700 and 750 people.

Judith Gleitze, a Rome-based researcher for the aid organization Borderline Europe, told The Local that migrants are becoming so desperate, there are even stories of them killing each other for space on tightly-packed boats.

“This is a horrible story and if the allegations are true, it will be the worst case,” she said.

Italy has for months been calling on the EU for more help in coping with the influx of migrants on its shores, but Gleitze believes that despite the horrors of the latest tragedy, there will be “no special movement in Europe” to stop it from happening again.

“Every day we hear stories of shipwrecks. There is so much death in the Mediterranean, but people see the migrants as animals, or as bad people. I don’t think this will change anything at the European level.”

The five arrested were named as Mhamed Morad Al Fallah, 21, from Syria, Youssef Dahman, 21, and Abdrzakc Asbaoui Asbaoui, 25, from Morocco, Saddam Abuhddayed, 25, from the Palestinian territories, and Jamal Rajeb, 32, from Saudi Arabia.

A further three were charged with people smuggling.

There has been a sharp rise in migrant landings in recent weeks because of the calm summer weather and growing lawlessness in Libya, with hundreds of migrants now being intercepted by Italian authorities every day.

Around 80,000 migrants are now believed to have landed in Italy so far this year – higher than the previous record of some 60,000 set in 2011 at the height of the turmoil triggered by the Arab Spring revolutions.

Most of the migrants making the risky and often deadly journeys come from Eritrea, Somalia and Syria but there are also many arriving from across Asia and sub-Saharan Africa.