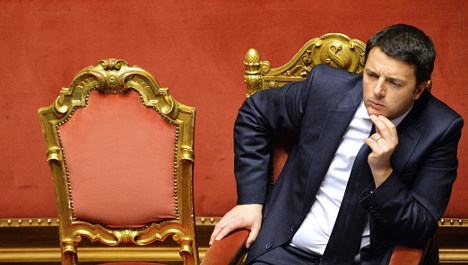 Renzi is using a so-called bear trap mechanism, which grants MPs 135 hours of debate on Senate reform and requires an agreement be reached by August 8th.

The move aims to force politicians to decide on the structure of the Senate, Italy’s upper house of parliament, including how senators will be appointed.

The reform is a vital part of Prime Minister Matteo Renzi’s political agenda, although since being tabled has received around 7,850 amendments. Before the government measure was brought in on Thursday, there were fears that the planned revamp would languish in Rome when MPs break for the summer recess in two weeks.

But the “bear trap” measure was met with anger in some quarters, with dozens of opposition politicians marching out of parliament in protest, Ansa reported.

Beppe Grillo, leader of the Five Star Movement (M5S), said on Friday the government’s decision amounted to a “coup d’état”.

At present the Senate’s powers are equal to those of Italy’s lower house, a structure often blamed for slowing down political action. As well as reducing the power of the upper house, Renzi’s reform envisages reducing the number of sitting senators.

The thousands of amendments are purely intended to stall the reform, while also grabbing the media spotlight, according to Duncan McDonnell, a politics fellow at the European University Institute in Florence.

“It is not in the interests of the opposition to provide Renzi with what would be his greatest success: reforming Italy’s byzantine political institutions,” he told The Local.

“If he can get this through, he would be in an extremely strong position then to go to the electorate and say, ‘See? As I promised; I really can change this country,'” McDonnell said.