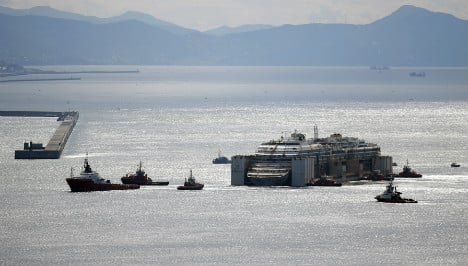 The refloated wreck of the Costa Concordia cruise ship being dragged to the harbor of Pra di Voltri near Genoa on July 27, 2014. AFP Photo/Marco Bertorello

The once-luxury liner was dragged into Genoa's Voltri port by several tug boats, four days after leaving its wreck site off the Tuscan island of Giglio
in an unprecedented salvage operation.

At dawn, engineers began to uncouple the ship from the Dutch- and Vanuatu-flagged boats which had towed it up the coast, and prepared to attach it to smaller tugboats which will help bring it into the port.

Civil protection agency chief Franco Gabrielli, on the portside to oversee the final stage of an unprecedented salvage project, told journalists a high wind was slowing the operation.

The refloated Concordia — twice the size of the Titanic — would dock sometime during the morning but was not expected to be secured until around 1400 GMT, he said.

Crowds of curious locals began gathering near the port on the outskirts of Genoa at first light, eager to see the remains of the battered ship, which crashed into rocks off Giglio island in January 2012 with 4,229 people on board in a disaster that claimed 32 livers.

Prime Minister Matteo Renzi is expected at the port later in the day to congratulate the international team of salvage workers which righted, raised and removed the doomed ship.

The remains of the 114,500-tonnes Concordia will not simply be thrown away: between 40,000 and 50,000 tonnes of steel will be reused, while other bits of the ship may end up in museums.

One of the first tasks awaiting scrap workers will be to search for the body of one of the victims, Indian waiter Russel Rebello, whose remains were never found and may have been trapped in a part of the vessel previously
inaccessible to salvage crew.