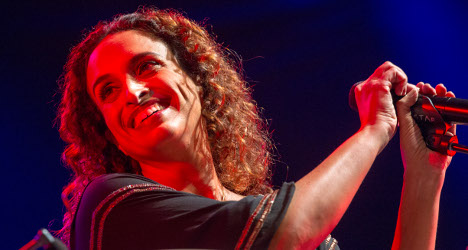 Israeli singer Achinoam Nini – known internationally by her stage name, “Noa” – had been due to perform on October 27th at the Manzoni theatre in Milan. Photo: Hector Guerrero/AFP

Israeli singer Achinoam Nini – known internationally by her stage name, “Noa” – had been due to perform on October 27th at the Manzoni theatre in Milan.

According to the organizers of the concert, the Italian branch of the Jewish women's organization Adei-Wizo-Donne Ebree d’Italia, the event had to be cancelled due to a lack of sponsorship.

But this version of events is contested by the singer’s Italian manager, Pompeo Benincasa, who said the cancellation was a deliberate attempt by the organizers to boycott the singer over her political views.

“The planned evening for October 27th in Milan was cancelled” due to “statements released by Noa to the press about the very difficult time of war in the Middle East,” the manager wrote in a letter, according to La Repubblica.

He added that the cancellation represented “the beginning of ostracism in Italy and follows on from what Noa has suffered for several years in Israel.”

In the past few months, the singer has made no secret of her political views.

The 45-year-old singer recently sparked controversy after she said in an Italian-language video interview: “I met [Palestinian President] Abu Mazen in Ramallah. I think that the Palestinian leader really wants peace with Israel, but unfortunately I can’t say the same for my prime minister.”

In February, the singer turned down an award from the Israeli recording arts association ACUM over its decision to hand a lifetime achievement award to far-right supporter Ariel Zilber.

Reacting to the accusations, Ester Silvana, president of the Italian branch of the Adei-Wizo-Donne ebree d’Italia association, said: “It’s just a misunderstanding. Politics has nothing to do with it. Unfortunately Mr Benincasa must have misunderstood a few sentences of an email that was sent by one of our subdivisions. The concert was cancelled only for economic reasons.

“We are a non-profit organization; our funds support nurseries and other activities. The event was organized three months ago, but just a few days ago we found out that no sponsors had been found to cover the costs.”

She added that she did not know if Noa’s statements had anything to do with the sponsor’s decision to withdraw their financial support.

According to La Repubblica, the organization has since announced that it will organize a new concert with Noa in Trieste.