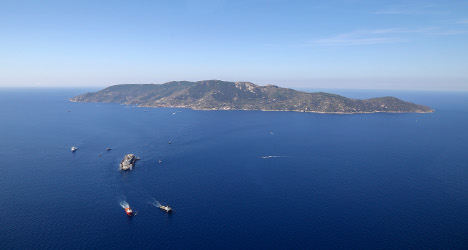 "I'll do what I have to do. But I won't be able to stop thinking about the cabin where we spent the best week of our lives," Lorenzo Capizzi, who works for one of the companies called in to scrap the hulking ship in the northern Italian city of Genoa, told the daily.

Capizzi and Laura Ponte celebrated their honeymoon on the luxurious liner – a floating city bigger than the Titanic with glitzy restaurants, swimming pools and casinos – five months before the ship hit rocks off the island of Giglio and capsized, killing 32 people.

The cabin they used was above the waterline when the ship rolled and is likely to be in much better condition than other parts of the wrecked vessel.

But Capizzi said he would still have to pluck up a lot of courage before walking in.

"It's impossible to remain objective. You can't go into the cabins and walk along the corridors without thinking of the panic, the terror felt that night," he said.

Ponte says she does not want to know anything about the scrapping of the liner, which was righted, floated and on Sunday dragged into Genoa port at the close of the biggest salvage operation in the world.

"It's like losing a friend who you prefer to remember as dynamic and enthusiastic," she said.

"I kept all the souvenirs from that trip: a model of the ship, daily schedules, receipts, tickets, photos with Costa Concordia logos" – items eager collectors have already tried to snap up but Ponte is not selling.

The couple remember joking during an emergency evacuation rehearsal on the first night of their cruise, which took them to Barcelona, Malta and Palermo.

"It was as if it was impossible that anything could happen in the middle of all that luxury, that perfection, that atmosphere which made you want to never get off the ship ever again," she said.