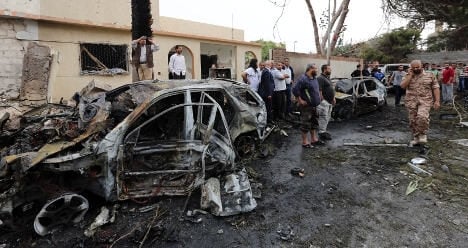 The aftermath of a car bomb attack on the French embassy in Tripoli on April 23rd 2013. Mahmud Turkia/AFP

They were taken across the border to Tunisia before being flown home by the Italian Air Force, after Foreign Minister Federica Mogherini called for immediate action to protect Italian citizens.

Tripoli’s airport has been closed for over two weeks as violence rages in the Libyan capital. Clashes between armed groups and government troops have left 97 people dead and over 400 injured, AFP reported citing the health ministry.

Conflict has also erupted in the eastern city of Benghazi, with at least 38 people being killed over the weekend.

The growing lawlessness has prompted a number of European governments to evacuate embassy staff or shut altogether, although Italy said its Tripoli outpost would remain open.

SEE ALSO: US troops deploy to Italy due to Libya threat

Despite this the Italian government “absolutely advised against” tourist travel to the country, stating the alert level for foreigners in Libya was “particularly high”.

“Security does not appear to be guaranteed even in the top hotels in Tripoli, which are usually frequented by tourists,” the government said.

Italy has been joined by numerous governments – including those of France, Germany, the Netherlands and the US – in encouraging foreign nationals to leave Libya.

The situation was described as “extremely unpredictable” by the German foreign ministry, while the Dutch government sent an “urgent” request to its citizens to leave the country. The Dutch embassy in Tripoli was expected to close temporarily, while US embassy staff were evacuated on Saturday.