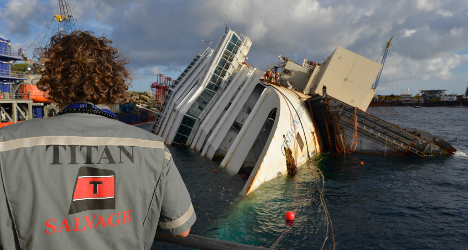 The Costa Concordia ran aground on January 13th 2012. Photo: The Parbucking Project

January 13th: The liner sets sail from the port of Civitavecchia near Rome, carrying 4,229 people from 70 countries. Many passengers are sitting down to dinner when the ship strikes a rocky outcrop off Giglio, after captain Francesco Schettino orders a sail-by "salute" near the Tuscan island. The blackout sparks panic and the ship begins to list. Evacuation gets underway in the darkness more than an hour after the collision, by which point the lifeboats on one side of the tilting liner are unusable. People jump into the freezing waters to escape, while Schettino is found ashore.

January 17th: Italian media leak a transcript of a telephone conversation during the evacuation between a shaken Schettino on shore and a furious port official who orders him to "get back on board for fuck's sake".

Passengers in several countries start lodging suits against Costa Crociere, the ship's owner, which on January 27th agrees to pay uninjured passengers at least €11,000 each in compensation.

February 12th: Salvage workers begin pumping 2,400 tonnes of fuel from the liner in a bid to avoid an oil slick off Giglio's pristine coastline.

September 13th: A pre-trial report says Costa may have failed to act promptly in the disaster, while still heaping much of the blame on Schettino – dubbed "Captain Coward" in the local press.

July 17th: The trial of Schettino begins in the city of Grosseto.

September 17th: The ship, which weighs 114,500 tons and is the length of almost three football fields, is hoisted upright in the biggest ever salvage operation of a passenger ship, over the course of 20 hours.

October 8th: Remains are found at the wreck of a female Italian passenger, one of the two victims still missing. The remains of an Indian waiter have still not been found.

May 6th: The salvage, planned for June, is delayed after a giant flotation tank attached to the wreck falls off.

June 30th: The government chooses the port of Genoa for the scrapping operation, slated to cost around €100 million.

July 14th: The ship is floated off the underwater platform on which it has been resting for the first time since the crash.

July 27th: After a four-day journey up the coast of Italy, the liner is towed into the port of Genoa where it will be dismantled over two-year period.