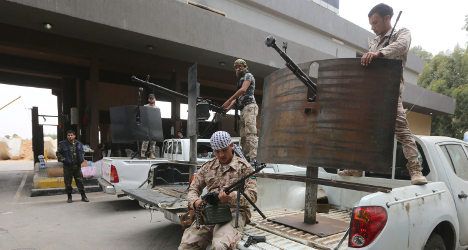 Members of the Libyan army guarding the western gate of Tripoli in May. Photo: Mahmud Turkia/AFP

"The five heads of state and government condemned the violence against civilians, the intimidation of state representatives and the disruption of the political process," it said.

They called on the United Nations "to play an essential role in facilitating the political process" in order to restore stability in Libya.

More than 100 Italians fled Libya in recent days as the violence escalated, although Italy’s embassy in the capital Tripoli remains open.

The Tripoli clashes, the most violent since a 2011 armed revolt that overthrew longtime dictator Moamer Kadhafi, started with a July 13th assault on the airport by armed groups, mainly Islamists.

The deadly fighting has spread to other cities and on Monday a huge fire erupted at an oil depot outside the Libyan capital, threatening its vital oil industry already hit by the exodus of foreign workers.

The violence has led the United Nations and the United States to withdraw their personnel from Libya while other Western powers have told their nationals to leave the country.

In the telephone talks, the leaders also addressed the crises in Ukraine and Gaza.