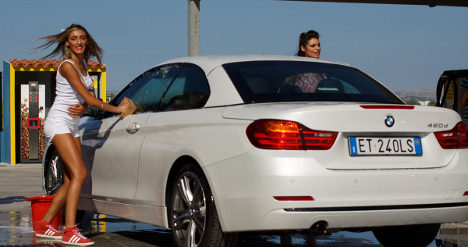 In fact, Maurizio Gianni, the owner of Albo car wash in Olbia, said he plans to hire male models as part of the next so-called “sexy car wash” event on August 9th in a bid to “silence the feminists”.

As word spread across the island on Saturday that the women – hired from an employment agency – were cleaning cars, a queue of male clients quickly formed.

The initiative was slammed by a local women’s group, Prospettiva Donna, for being “detrimental to the dignity of women”.

But Gianni insists it was only intended to attract attention to his business, which has been hit hard by the financial crisis and recent bad weather. It was not meant to be “vulgar towards women”.

“It also gives the women a job for a few hours,” he said, adding that a female works full-time at the car wash.

“I find women, especially the younger ones, are better workers than men. They’re more enthusiastic and happier.”

Despite lacking a sunny disposition, male models will be used at the next “sexy car wash” show, a move Patrizia Desole, the president of Prospettiva Donna, said “made no difference”.

“The only reason he’s now using men is because of the controversy,” Desole told The Local.

“Whether it’s men or women, it still shows a lack of respect. For years we have been fighting to defend women’s rights and combat gender-based violence. This type of publicity destroys all of that.”