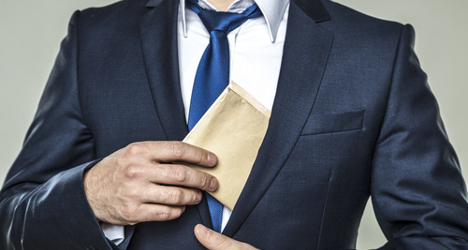 The tax officials were arrested and charged with extortion, forgery and fraud. Bribery photo: Shutterstock

Giuseppe Costantini, 57, and 40-year-old Gian Piero Giliberti were arrested in Rome after an investigation into their work at the Italian Revenue Agency (Agenzia delle Entrate), Rai News reported on Tuesday.

They are accused of bribing business owners out of €7,000-€8,000 for every €100,000 discount on their tax bills; a scheme which unravelled after they tried to strike a deal with an honest restaurateur.

Costantini and Giliberti allegedly offered to change the restaurant owners’ tax bill, in exchange for €25,000. The businessman instead went to the financial police, who set up a sting operation.

The tax officials agreed to pick up the cash from the restaurateur's office but backed out when they became suspicious, Rai News said.

Unbeknown to them, the police had set up audio surveillance and caught one of the men say: “Lucky I didn’t take the money.”

The pair were then arrested and charged with extortion, forgery and fraud. Prosecutors are continuing to check for further irregularities in their work.