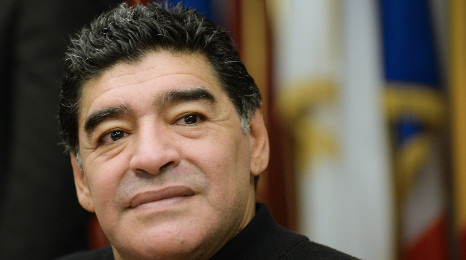 Diego Maradona played for Napoli between 1984 and 1991. Photo: Andreas Solaro/AFP

The alleged €39 million unpaid tax bill dates back to when Maradona played for Napoli between 1984 and 1991, Pisani said.

Tax agents began procedures to freeze his assets in Italy over the debt last October.

Equitalia said in a letter addressed to Maradona on May 30th, and seen by The Local, that it had suspended foreclosure procedures "pending further notice". The tax court in Naples ordered that suspension on Wednesday, a move Pisani said was based on new evidence that shows “no tax violation” ever existed against Maradona.

"Finally there will be truth on the Maradona case", he said, adding that the “ambush” of the footballer by the tax agents started in 2001, “when they hunted him down on the steps of an aircraft, before he even set foot on Italian soil”.

Maradona, who is now a sports ambassador for the United Arab Emirates, also had two Rolex watches and a diamond earring confiscated in a hotel room during a visit to Italy in 2003.

“It seems that today, everything is clear and the ordeal has ended,” Pisani said.

Pisani added that Maradona was a man who had “caught the imagination of Neopolitans” but was instead “treated like a criminal".

“It seems impossible, but the strength of the documents and the clarity of truth has put an end to this absurd manhunt declared by the Italian tax authorities, and not the judicial system, of one of the greatest champions of our time."

In response to the claims, Maradona protested in 2013 that he was "not a tax fraudster".

"I was playing football and someone else was signing for me," he said.