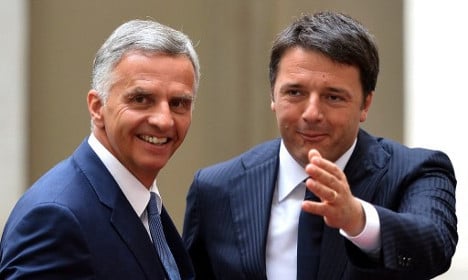 The pair discussed “various bilateral matters” between the two countries including tax, finances and Swiss-EU relations, according to a federal government press statement.

“Swiss policy in relation to the European Union and their mutual interest in maintaining and consolidating bilateral approach” was the main item up for discussion between Burkhalter and Renzi, after Italy assumed the EU Presidency on July 1st.

The pair also discusse the crisis in Ukraine. Burkhalter is the head of the Vienna-based Organization for Security and Cooperation in Europe (OSCE) which is working to reduce tensions in Ukraine.

Burkhalter, who is also Swiss foreign minister, also met his Italian counterpart in the foreign office, Federica Mogherini, to discuss the situations in Ukraine, the Middle East and Libya.

“Switzerland and Italy have a tradition of good relations, characterised by close political, human and cultural ties and a shared language,” said the statement.

Switzerland is Italy's fourth most important export market, while Italy is Switzerland's third largest trading partner, behind Germany and the US.