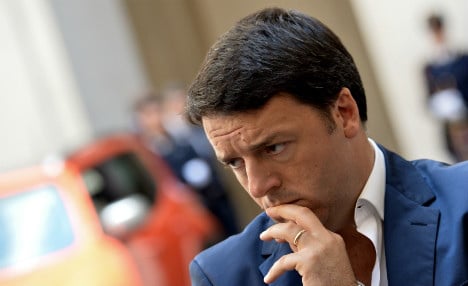 Italy's Prime Minister Matteo Renzi looks on during the presentation of a new car model by Italian automaker Fiat, on July 25, 2014 at the Palazzo Chigi in Rome. AFP Photo/Tiziana Fabi

"Growth is certainly much weaker than we expected. We're not in a position to be as virtuous as we imagined," he told members of his centre-left Democratic Party, two weeks after the Bank of Italy dramatically slashed its growth forecast.

The admission did not stop the ambitious 39-year-old declaring that Italy — which currently holds the presidency of the European Union — will "lead the recovery" in Europe.

The national statistics institute (ISTAT) agreed with the sombre assessment on Italy's growth.

"The signals coming from families and businesses appear to portray a phase of substantial economic stagnation," it said.

While business confidence is on the up, households have yet to begin pulling out of the deepest recession since World War II.

Last week the government said it would be forced to revise down its initial forecast of 0.8 percent growth in 2014, but has yet to announce a new target.

This followed the Bank of Italy's radical overhaul of its January forecast from 0.7 percent to just 0.2 percent. The International Monetary Fund (IMF) also lowered its 2014 growth prediction from 0.6 percent to 0.3 percent.

At a meeting between the Italian and French foreign ministers in Rome on Thursday, the two countries were united in pushing a policy of increased fiscal flexibility despite disappointing eurozone growth rates.

While the situation "in terms of inflation is worrying", the countries remained "100 percent in agreement" on how to proceed, French minister Michel Sapin told a press conference.

He insisted on the importance of "policies on a European level which support growth".

Sapin added: "There can be no question of turning our backs on efforts to reduce deficits and debts. We need deep structural reforms."

Analysts forecast France's economy will grow by 0.7 percent this year. It has fared better than Italy during the financial crisis, but President François Hollande's promised economic "turnaround" has yet to materialize.