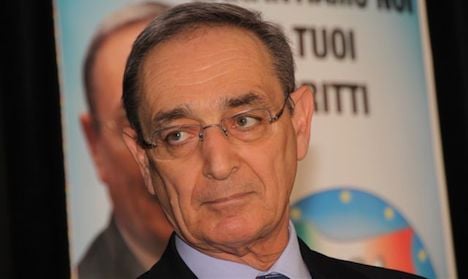 Carlo Taormina was convicted for discrimination by a court in Bergamo, northern Italy, La Stampa reported on Wednesday.

The former MP and lawyer was taken to court following a Radio24 interview on October 16th, in which he said gay people are “against nature”.

For Judge Monica Bertoncini, Taormina’s “discriminatory character” was expressed by him asserting “that he didn’t want to hire gay people in his law firm.”

Taormina was ordered to pay €10,000 to the legal professionals’ Rete Lenford LGBT rights organization, who fought the case against him, in addition to publishing a public statement about the case.

The verdict was welcomed by rights group Arcigay, whose president Flavio Romani said it was a legal first in Italy.

This is “the first conviction in Italy for discrimination against gays and lesbians in the workplace,” Romani was quoted in La Stampa as saying.

“This penalty evidently isn’t limited to the events of the well-known criminal lawyer, but extends to the current political debate about homophobia and transphobia,” he added.

Taormina is the latest in a series of high-profile figures to land themselves in hot water as a result of anti-gay comments. Guido Barilla, head of the family-run pasta giant, famously said last year that he wouldn't feature gay families in his adverts, a comment that embroiled the company in global controversy.

Politicians are due to begin discussing new freedoms for gay people following the summer recess, including the possibility of legalizing gay unions.