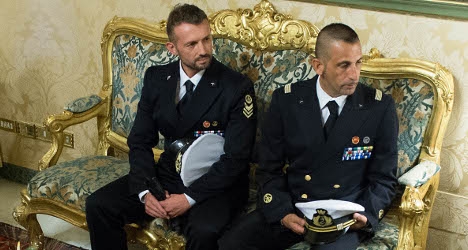 Salvatore Girone (L) and Massimiliano Latorre are accused of shooting fishermen off the coast of Kerala. Photo: Paolo Giandotti/HO/AFP

Marines Massimiliano Latorre and Salvatore Girone are accused of shooting two Indian fishermen off southern coastal Kerala state in February 2012 while serving as security guards on an Italian-flagged cargo ship.

The pair say they mistook the fishing boat for a pirate vessel and only fired warning shots.

On Monday, Modi's office issued a statement, confirming that the two premiers had a telephone conversation and tackled the issue.

Modi also urged Renzi to allow the judicial process to take its own course since the matter was before the Supreme Court of India.

In this context, Modi stressed the Indian judiciary was free, adding that "we are convinced that it (the court) will take all aspects into consideration in adjudicating the case".

In March, India put legal proceedings against the marines on hold in response to a petition challenging New Delhi's jurisdiction in the case.

Italy insists the pair should be tried on home soil since the shootings involved an Italian-flagged vessel in what Rome insists were international waters.

In March, Italy sought help from the US in resolving the long-delayed case soon after recalling its ambassador from India amid worsening ties.