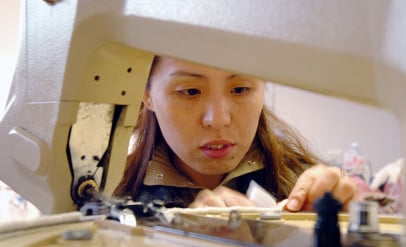 The figures from the Mestre unit of CGIA, the artisan and small business association, also reveal that openings of foreign-owned businesses in general surpassed Italian ones, with an increase of 3.1 percent during the same period.

Although the Moroccans lead the way, with 72,014 businesses in Italy, followed by the Romanians, with 67,622, Chinese entrepreneurs are rapidly catching up, with 66,050.

They are most prominent in Lombardy followed by Tuscany, Veneto and Emilia Romagna.

"Although in some areas of the country there are pockets of lawlessness that feed the black market and the market for counterfeits, we must not forget that the Chinese have always shown a strong commitment to business activities,” CGIA Secretary Giuseppe Bortolussi said in a statement.

“In fact, the Chinese, from the moment they leave home, are among the most skilled in employing the networks to help make their migratory project a success.”

Matteo Wang, whose family has owned the Fu Hao restaurant in Rome’s Flaminio district for 26 years, told The Local that achieving that success has meant working all-year-round, with only a break for Christmas.

“We take it in turns to take a few days off here and there, but other than that, the restaurant is always open. The Chinese have a very strong work ethic.”

The restaurant has had to weather various crises, including a scandal revolving around out-of-date meat at other restaurants across the country.

“People thought the chicken was bad so for some time we had to work hard to bring them back,” Wang said.

“We’ve also had to be more competitive, such as with lowering prices and offering special menus.”

Despite the high taxes and bureaucracy in Italy, Wang said that it made sense for his family to open a restaurant here.

“China is obviously full of Chinese food restaurants, but here we’ve been able to cater to foreign tastes too and we have regular Italian clientele.”

There has also been recent high-level investment in Italy by Chinese firms, including a deal for Shanghai Electric to buy a 40 percent stake in the Italian power engineering company Ansaldo Energia.

"Many people think efficiency (in Italy) is not so good and China has grown very fast, so we need to study China," Renzi said.