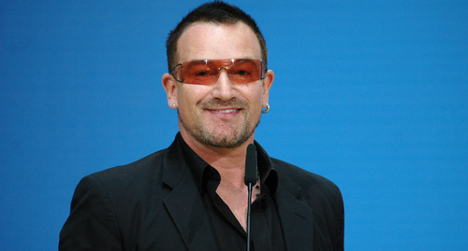 Bono, the leader singer of U2, sent the premier a letter, seen in the tweet below, praising his leadership of the band’s “favourite country”, Corriere reported, along with several other Italian news outlets including Blitz Quotidiano and Huffington Post Italia.

Although the singer makes a slight slip-up with the spelling of Renzi’s name, leaving out a ‘t’ in Matteo, he goes on to thank him for “consolidating the Italian people and their great creativity and a vision for the future that includes ‘everybody’”.

U2's publicist could not be reached when contacted by The Local to confirm if the letter was written by the singer.

Bono, a fervent human rights campaigner, pledged his love for Italy in a letter published in La Stampa in 2009. The letter was published ahead of the band’s performance in Milan, and also coincided with the G8 summit that year.

Entitled ‘Love letter to Italy’, Bono wrote about how, when he was a child, he had the notion that singing was born in Italy, due to the influences of his father’s collection of Italian opera music, which included Traviata and Tosca.

“I guess you could say I was in love with Italy even before I knew there was an Italy,” he wrote.

“I knew it as soon as we arrived. Our version of soul music did not have to be explained the way it did in Northern Europe.”

But then the letter takes on a more serious tone, with Bono saying that Italy had fallen behind more than any of the other G8 countries with providing aid to Africa.

“So we find ourselves here loving Italy as much as ever, but agitating once again.”

Bono ends the letter with a reference to Pavarotti and his “volcano of a voice”.

“A volcano that blew a hole in the sky, and in my heart – in the heart of anyone who ever heard him sing. Serious interpretive talent…next to charmer, performer, lover, husband, father, friend, child and man. Paradox always. Like his country.”