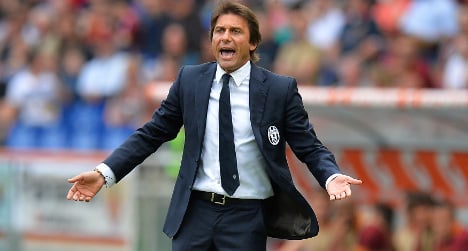 The 45-year-old was widely expected to take over from Cesare Prandelli, who stepped down after Italy's first-round exit at the World Cup finals in Brazil.

FIGC president Carlo Tavecchio said Conte, who will earn two million euros (£1.6m, $2.7m) a year, will be presented at a press conference on Tuesday in Rome.

Conte's first match in charge will be on September 4th when Italy face the Netherlands in a friendly.

Five days later, Italy begin their Euro 2016 qualifying Group H campaign in Norway and the pressure will be on for a team whose failure in Brazil was the second successive World Cup at which they had failed to get out of the group stage.

With a contract running until July 31st, 2016, Conte has a mission “to relaunch the national team and develop new players from across the federation's training centres,” said a statement released by FICG.

The federation also said that the contract with Conte had been made possible with the financial support of sportswear giants Puma.

Conte can also boost his earnings with bonuses linked to the qualifying the team for the Euro 2016 finals as well as boosting his team's world ranking.

The national team currently stands at 14.

Conte steered Juventus to a third consecutive title last season, the first time the club had achieved the feat since a five-season title run in the 1930s.

He has since been succeeded in Turin by former AC Milan coach Massimiliano Allegri.

Conte's time in charge of Juve was not without its controversial moments as, in the summer of 2013, he was caught up in a corruption row after he was charged with failing to report attempted match-fixing during his time with his previous club Siena.

He protested his innocence but was banned for 10 months, reduced on appeal to a four-month touchline ban, which saw him miss the first half of last season.

Conte, who captained the club during his playing career which stretched over more than 500 games and included five league titles, also led Juve to a record points haul of 102 points as they won their 30th official league title last season.