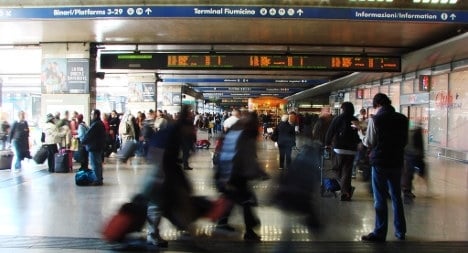 Britain isn’t the only nation to warn its citizens of the prevalence of petty crime in Italy, it has emerged.

The American, German, French and Belgian Foreign Offices have also alerted their citizens to the dangers of pick-pocketing and bag-snatching in Rome, Il Messaggero has noted.

In travel advice published by the US Department of State, travellers to Italy are urged to “exercise extra caution at night and at train stations, airports, nightclubs, bars, and outdoor cafes.”

It warns of “petty crimes such as pick-pocketing, theft from parked cars, and purse snatching” in large cities and even sexual assault.

“Some travellers in Rome, Florence and Naples have reported incidents in which criminals have used drugs to assault or rob them,” according to the advice.

Typically, it says, criminals will “offer you a drink laced with a sleeping drug. When you fall asleep, criminals steal your valuables and may sexually assault you.”

It singles out Rome’s Termini Station and at the bars and cafes near Rome’s Colosseum, Colle Oppio, Campo de Fiori and Piazza Navona, as well as the bars and cafes in central Florence and Naples, as places where such crimes have been reported.

The problem of criminals targeting American tourists was highlighted earlier this month when an American policeman on holiday in Rome was attacked after refusing to buy roses from a street vendor on the Spanish Steps.

Meanwhile, the French Foreign Ministry tells travellers to be extra vigilant on Rome’s Metro Line A, the number 64 and 40 buses, the Trevi Fountain, Corso Vittorio Emanuele and via del Corso.

Motorists are urged to keep car windows and doors closed at all times, even when the car is moving.

Belgium’s Foreign Ministry also mentions bag-snatching as a common form of crime in Italy. “As tourists in Italy you risk being the victims of bag-snatchers all year long on the metro, the bus, stations and in airports,” the Ministry says on its website, according to Il Messaggero.

German citizens in Italy are warned of “new” techniques used by thieves to distract tourists such as “shoving” in crowded places such as the train line between Fiumicino airport and Trastevere station, as well as other railway stations.

Beaches such as those in Ostia, near Rome, are also singled out as hotspots for petty crime.

This advice will no doubt be welcomed with dismay by Rome’s mayor Ignazio Marino who last week described the travel advice from the British Foreign Office as “misleading and false”, claiming that London was much more dangerous.

“Rome eagerly welcomes all tourists form the United Kingdom, but Romans are offended by the warnings which have a sense of non-existent superiority,” the mayor said, according to La Stampa.

While the British Foreign Office says on its website that “crime levels are generally low” in Italy, it warns of “higher levels of petty crime (particularly bag snatching and pick-pocketing) in the big city centres.”

It advises tourists to pay particular attention to gangs who it claims hassle and jostle tourists to distract them, “while other members of the gang go into action,” singling out the central Termini Station and the no 64 bus as danger areas.