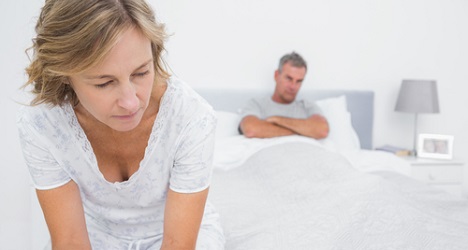 Marco Bertoni and Giorgio Brunello, from the University of Padova, found that women can suffer “stress, higher depression or inability to sleep” once their husbands retire.

The duo’s research focused on Japan, but they said the syndrome affects women “around the world”.

Bertoni and Brunello noted that couples often drift apart during their marriages, spending little time together before retirement creeps up and throws them back together.

“After a life apart and progressive estrangement, many Japanese couples are forced to start spending time together when the husband retires.

“This can be a very stressful experience for wives, who suddenly have to face the continuous presence of a stranger in the house and the additional burden of his requests,” the academics said in the paper published by the Institute for the Study of Labor (IZA) in Bonn, Germany.

While Retired Husband Syndrome (RHS) has been described in the past, the new research is the first extensive study.

The academics dismissed the suggestion that the syndrome affected women in Japan because of the country’s traditional gender roles, which creates a division between housewives and their working husbands.

The situation is in fact worse for working wives: “We have found that retirement effects are stronger for employed women, who are already stressed by their job and have less time to comply with the additional requests by their retired husbands.”

But men's mental health can also decline when they retire, which will likely have a negative impact on their spouses’ well-being, Bertoni and Brunello concluded.