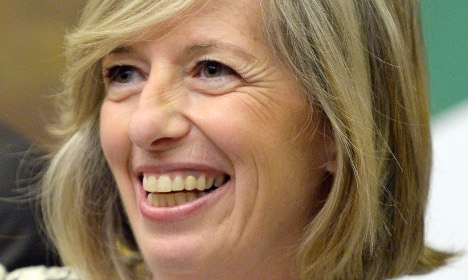 The photo, showing Giannini sunbathing topless, was published by the gossip magazine on Tuesday. It has since been reproduced by Corriere della Sera, Italy’s leading daily, and other news organizations including Il Messaggero.

Speaking to The Local, Giannini’s spokesman Angelo di Silvio said “the minister does not intend to comment.” He would not say whether she intended to take legal action against Chi.

But rather than spark a debate over Giannini’s right to privacy, Italians have instead focused on whether she was right to go topless on holiday at all.

“I don’t have anything against going topless, but when someone takes on an institutional role it would be best to avoid it. Wearing the top half of a bikini doesn’t feel like a great sacrifice to me,” one Corriere reader commented.

“She’s not a private manager, my lawyer, a surgeon, she’s a minister of the Republic. You wouldn’t catch Merkel going topless!” added another. One reader described Giannini’s choice as “provincial and exhibionist”.

But some people have come to her defence, with a Corriere reader writing: “A minister, and anyone else, should be able to be nude, but in Italy she can’t, too many bigots!”

Another said the furore demonstrated Italy’s lack of progress and amounted to “neo-bigotism”. “It appears proven that the liberty that existed in the 70s and 80s has by now gone,” they lamented.

The debate also raged on Twitter, although the discussion itself attracted criticism in some quarters. “But really, a woman going topless is news?” they quipped.