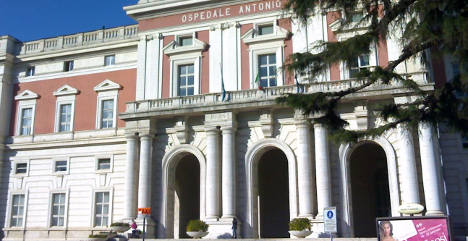 The Cardarelli hospital in Naples, where relatives snatched the body of a mafia member. Photo: Il Sistemone

They then made claim to the body of 50-year-old Gennaro Cotroneo, driving away with it in a procession of cars and mopeds.

According to the newspaper they took the body so that they could mourn their dead relative. A wake was subsequently held in the middle of the night, in the Parco Verde area of nearby Caivano.

When contacted by The Local, no-one at the hospital was available to comment on the incident.

Cotroneo was the brother-in-law of a boss from the “Zì Carminiello” drug trafficking gang, who has in the past been investigated for mafia association, La Repubblica said.

Following the body-snatching the police were ready to intervene “in a drastic manner” if the corpse was not returned, the newspaper said. But the body was returned within 24 hours and is now awaiting an autopsy.

While authorities are investigating a number of people over the theft, members of the mob are in turn demanding the hospital be probed. Cotroneo’s family argue he went into hospital suffering from an infection and want answers as to how he came to die, La Repubblica reported.