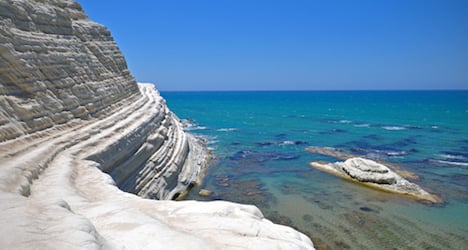 Police and volunteers will be on hand to enforce the fine. Stair of the Turks photo: Shutterstock

Tourists visiting the bright white rocks in Realmonte, on Sicily’s southern coast, have reportedly been robbing the stone to such an extent that local authorities have been compelled to take action.

Anyone now caught stealing a piece of “souvenir” stone will now be fined €500, Giornale di Sicilia reported on Thursday.

“There will be help from the provincial police to make sure the rule is respected on all of the Stair of the Turks,” Realmonte Mayor Piero Puccio was quoted as saying.

“A municipal police officer, two auxiliary agents and a number of volunteers from the Committee for the Protection of the Stair of the Turks will also be involved,” he added.

Sicily is not the only place in Italy to fall victim to light-fingered tourists. Earlier this year a Canadian visitor to Rome’s Colosseum was caught with a piece of the ancient site stuffed in her backpack.

Tourists have also been caught defacing ancient monuments – including the Colosseum and Florence’s Ponte Vecchio – and breaking statues.