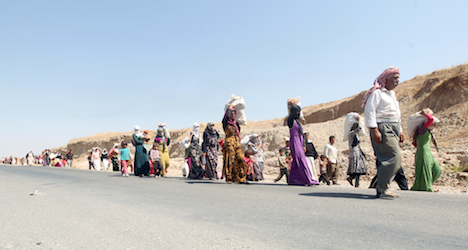 Thousands of people have been displaced by violence in Iraq. Photo: Ahmad Al-Rubaye/AFP

"The preparatory work is already under way and could be finalised in the coming days," Defence Minister Roberta Pinotti told a joint meeting of the parliamentary commissions for defence and foreign affairs. The government signalled an arms shipment would include machine guns and anti-tank rockets.

During his visit the Italian premier likened the recent to the 1995 Srebrenica massacre in Bosnia, in which more than 8,000 civilians were massacred, and pledged European support in Iraq.

At an emergency meeting on Friday, EU foreign ministers agreed in principle to back the arming of the overwhelmed Iraqi Kurdish fighters in the face of the Isis onslaught.

In a highly significant move, Germany on Wednesday said it was ready to send weapons to support Iraqi Kurds in their battle against Isis, while France pledged to hold a conference on the security of the region and the battle against the "barbaric" militants.

After other European nations said they would arm Kurdish forces in northern Iraq, "we are ready to do the same," German Foreign Minister Frank-Walter Steinmeier told reporters.

Paris has already said it will dispatch arms to Kurdish fighters but sending weapons is unusual for Germany, which often shies away from foreign military engagements and as a rule does not export arms into live conflict zones, given its past aggression in two world wars.

Germany said it would first send more humanitarian aid and non-lethal equipment such as helmets, night-vision goggles and explosives detectors while it checked what weapons shipments would make sense, in coordination with EU partners.

Britain, a leading player in the 2003 invasion of Iraq that toppled dictator Saddam Hussein, has said it would "favourably consider" arming the Kurds if they received such a request.