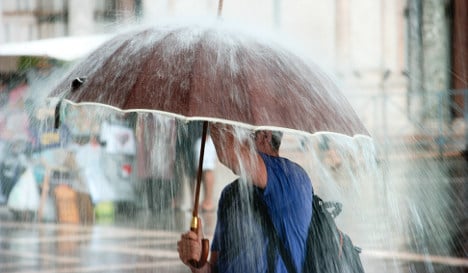 This summer has been nothing short of disastrous for many of Italy’s seaside towns with reports of the wettest weather in living memory in Tuscany and even a tornado in Genoa.

Earlier this week, the mayor of a seaside town in Forte dei Marmi, northern Tuscany, called on Italy’s education minister to extend the summer break by one month to save the town’s flagging tourism industry.

His request was rejected, but he isn’t the only one coming up with new ways to encourage tourism.

As the summer comes to an untimely end, hotel owners, resorts and town authorities are becoming more and more creative, according to La Stampa.

Some hotels in Lignano Sabbiadoro, in the northern Friuli-Venezia Giulia region, are offering a 50 percent discount per night for each day of bad weather to tourists who book at least three nights. And on the final day they do not have to pay for the use of a deckchair or sun umbrella.

“We’re trying to repair an unfortunate season,” Luigi Sutto, President of the Lignano Holiday group and owner of the Athena Hotel was quoted by the paper as saying. “In the absence of alternatives to offer those who come to swim, we are investing in a delicate issue: [their] wallets.”

Meanwhile, at the Savoy hotel in Versilia, northern Tuscany, guests get a reduction of ten percent per day of bad weather.

“[It’s ] an incentive for Italians who come [here] only to be by the sea,” says owner Iacopo Ciardella. “Foreigners are less worried. If there’s bad weather they don’t lose heart, they rent a car and use it to visit cities of art or a museum. The Uffizi are always beautiful whether it rains or not.”

And in the beach area of Jesolo Lido in Venice tourists can even pay a little extra for “rain insurance”.

“Those who pay online can no longer complain. They just need to pay one more euro and they are insured against the bad weather,” Michele Bergamo, who is in charge of the OroBeach and GreenBeach in the area told La Stampa.

But not all hotels agree with offering guests financial incentives.

“On the second day of rain my clients leave because there is nothing to do,” Mattia Detoni, who runs the Hotel Olivo Arco on Lake Garda told La Stampa. “The only museum in the area is the Muse di Trento. The problem is not so much the price, I can even charge €20 a night. But for what? To stay shut up in a room?”