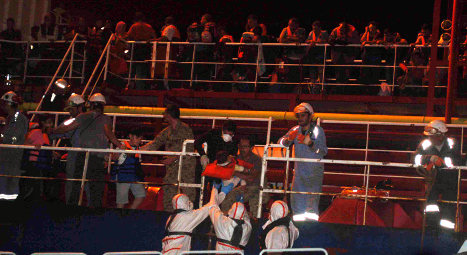 More than 300 would-be immigrants have been killed in recent days in disasters areas in the Mediterranean. Photo: Marina Militare/AFP

More than 300 would-be immigrants have been killed in recent days in disasters areas in the Mediterranean, many near Italy.

The 24 bodies were recovered after a fishing boat with nearly 400 people on board went down off Libya on Sunday evening.

Lifeboats dropped from a helicopter dispatched from the Italian island of Lampedusa enabled 364 people to survive, lifting to some 4,000 the total number rescued over the course of what was a deadly weekend, according to navy figures.

Talks on the issue were being held in Rome on Tuesday between officials representing Italy, the European Commission and Frontex, the European borders agency. Italian Interior minister Angelino Alfano is due in Brussels on Wednesday for further discussions with Home Affairs Commissioner Cecilia Malmström.

A string of disasters has heightened the sense of crisis, with Malmström saying she was "appalled" by the recent tragedies.

On Friday, a 50-foot wooden boat carrying at least 270 people sank off Guarabouli, Libya. Only 19 of those on board are known to have survived. The others, mostly migrants from sub-Saharan Africa are presumed to have perished.

On Sunday morning, an inflatable dinghy was found floating adrift off Lampedusa. Eighteen corpses were found along with 73 survivors.

In that case, Italian authorities have ordered autopsies to establish the exact causes of death as some of the corpses had injuries which appeared to have resulted from being struck with metal bars.

According to the UN refugee body UNHCR more than 100,000 migrants have reached Italy by boat since the start of the year.

Their risky journeys, mostly organised by people smugglers, have resulted in numerous sinkings and the loss of at least 1,889 lives, the vast bulk of them in the last three months.

"According to the 19 survivors, the boat was packed absolutely full of people and they said at the last minute, as the boat was departing, more people were pushed onto the boat," she told a press briefing in Geneva.

"Soon after departure, the boat flipped over and particularly those at the bottom of the deck had absolutely no chance to escape".

UNHCR sees the implosion of Libya as the primary factor driving the recent surge in numbers seeking to cross the Mediterranean, and urged EU governments to do more to address the crisis.

More needs to be done

"The worsening security situation there (in Libya) is fostering the growth of ruthless smuggling operations," Fleming said."It's also prompted some refugees and migrants who are living in Libya, who otherwise may not have decided to leave, to leave."

Fleming added: "Obviously, with all of these deaths, more needs to be done."

The refugees in Libya have made their way there from various strife-torn countries, most notably Eritrea, Syria and Somalia. Fleming said more were now being to arrive from northern Iraq.

Italy has accused its EU partners of turning a blind eye to the tragedies occurring off its southern shores.

The country's lengthy sea borders makes it a relatively easy point of entry to Europe for would-be migrants or asylum seekers, but most arrive with the intention of travelling on to other countries in the bloc.

Two major shipwrecks last October prompted the government in Rome to launch a rapid-reaction navy operation known as "Mare Nostrum" and is now pushing for the EU to take over the operation and share the financing.

The 100,000 migrants who have reached Europe via Italy this year compares with an estimated 60,000 in 2011 – a year in which much of north Africa was convulsed by instability during the Arab Spring revolutions.