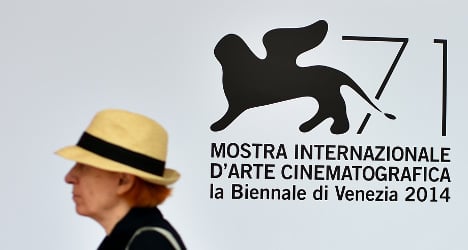 The Venice film festival begins on Wednesday and will run until Septmber 6th. Photo: Gabriel Bouys/AFP

Taking the stage first at the world's oldest film festival will be Mexican director Alejandro Gonzalez Inarritu's Birdman or the Unexpected Virtue of Ignorance, starring Michael Keaton of Beetlejuice and Batman fame.

In the first of 20 flicks vying for the coveted Golden Lion award, Keaton plays a washed-up actor once famous for playing a superhero, who is now struggling to put on a broadway play in a bid to regain his former glory.

Crowd-pleaser Inarritu, best known for his films 21 Grams and Babel, pampers fans by bringing on board other superhero veterans for the movie, including Emma Stone from The Amazing Spiderman and Edward Norton, star of the 2008 The Incredible Hulk.

Other hotly-awaited world premieres include Good Kill by New Zealand's Andrew Niccol, starring Ethan Hawke as a drone operator in Afghanistan, and David Gordon Green's Manglehorn with Al Pacino as an ex-con turned locksmith with a broken heart.

French film composer Alexandre Desplat – whose dozens of works include the scores for The King's Speech and Harry Potter and the Deathly Hallows – will head up the main jury at the festival, which runs until September 6th.

Desplat was among the cinema luminaries quaffing prosecco at the festival's opening party on a roof terrace near Saint Mark's Square in the floating city on Tuesday, kicking off a fortnight of glamorous beach galas and red-carpet ceremonies.

Festival director Alberto Barbera brushed off criticisms that this year's edition was light on Hollywood stars, saying the aim of the organizers had been to create space for high-quality, innovative flicks which risk falling through the cracks.

"I have nothing against glamour, but it cannot be the only component in a festival. The idea is to explore cinema today in all its complexities," he said.

The festival is bringing a new generation of artists to the Lido this year with its first edition of a gap-financing market – which matches young producers in need of funds with investors and distributors – as well as Final Cut, which showcases finished films from Africa and the Middle East to buyers.

While still in its infancy, the Venice market – now in its third year – recorded a 25 percent increase in the number of producers and agents attending last year, with a particularly strong showing from China, according to Barbera.

There is buzz from critics already over the only first feature competing for the Lion, the Turkish Sivas, by Kaan Mujdeci, about a young boy who befriends a dog he saves from a fight in a bid to protect himself from a violent society.

American Ramin Bahrani looks at the fallout of the economic crisis with his drama 99 Homes about a father trying to recover his house after an eviction, while Russia's Andrei Konchalovsky dwells on loneliness in "The Postman's White Nights".

The only documentary in competition is The Look of Silence, Joshua Oppenheimer's follow-up to his acclaimed 2012 The Act of Killing, which this time sees Indonesian genocide survivors confront the killers of their brother.