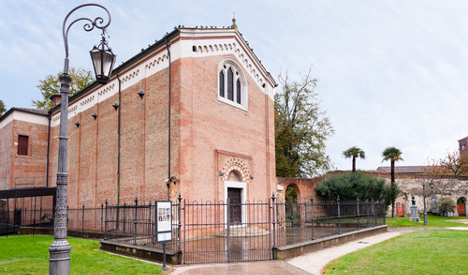 The Chapel's cross was removed after being damaged by lightning. Scrovegni Chapel photo: Shutterstock

The lightning hit the outside of Padua’s Scrovegni Chapel, in north-east Italy, Il Secolo XIX reported on Wednesday.

The chapel’s cross has had to be removed while checks are carried out to determine the extent of the damage. The internal walls are entirely covered by Giotto’s frescoes, completed in 1305, which depict the life of Virgin Mary.

While the storm swept over around two weeks ago, the damage only came to light when cultural centre Amissi del Piovego raised the alarm.

The delay has been fiercely criticized by former councillor Giuliano Pisani, who said it was “absolutely scandalous” that local authorities had not announced the news.

“We’re talking about Giotto's chapel, heritage of humanity. How is it possible that the council hasn’t said anything?” he was quoted in Il Secolo as saying.

But Fabrizio Boron, a serving councillor, dismissed fears that Giotto’s frescoes are under threat.

“It was only a lightning bolt that hasn’t done any damage to the monument,” he was quoted as saying. He added that the local authority had just received a €500,000 government fund, specifically for the maintenance of Giotto’s masterpiece.