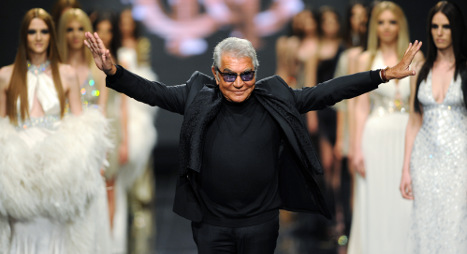 The Florence-born Cavalli, known for his exotic prints, is accused of infringing the copyrights on work completed by the three artists in San Francisco’s Mission district in 2012, a US website, The Fashion Law, reported.

Jason Williams, Victor Chapa and Jeffrey Rubin claim the designer’s Just Cavalli label “introduced a clothing and accessories collection in which every square inch of every piece – including clothing, bags, backpacks, and shoes – was adorned with graffiti art.”

They added in their complaint to the Central District of California court: "If this literal misappropriation was not bad enough, Cavalli sometimes chose to do its own painting over that of the artists – superimposing the Just Cavalli name in spray-paint style as if were part of the original work. Sometimes, Cavalli added what appears to be a signature, creating the false impression that Roberto Cavalli himself was the artist."

They are seeking damages and calling for the collection to be discontinued.

A spokesperson for Roberto Cavalli S.p.A. was unavailable for comment when contacted by The Local.

The company also sparked controversy among Shia Muslims in June over a perfume ad, featuring Mick Jagger's daughter Georgia, which used a logo similar to a religious emblem of their faith.

Earlier this month it was reported that VTB Bank, a Russian lender facing Western sanctions, was in talks to buy a majority stake in the Cavalli fashion house.