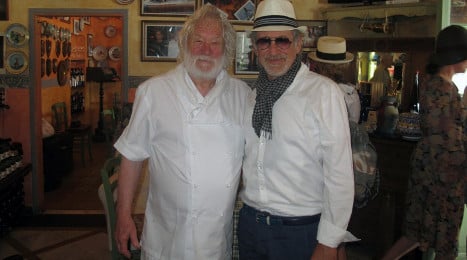 Spielberg moored his yacht in Porto Venere, a town along the Ligurian coast, and hopped on a smaller boat to the island of Palmaria, a favourite holiday destination for the rich and famous, on Tuesday last week, La Nazione reported.

Accompanied by his daughter and the brother of the actress Gwyneth Paltrow, to whom he is godfather, Spielberg headed to Locanda Lorena for dinner, where he enjoyed shrimp stew with spaghetti and baked sea bream.

The three went back to the restaurant for lunch the next day, when the film director opted for the lobster risotto, and on this occasion left staff a €300 tip.

But the tip “was not a surprise”, Giuseppe Basso, the restaurant’s owner told The Local.

“It was the first time Spielberg has eaten here,” he said, adding that Spielberg stayed on the island for three nights on his way back from Capri.

“We’re used to getting big tips: one of the biggest came from a lawyer to Russian President Vladimir Putin when he ate here last summer, he left us €1,200."

Basso added that the American actress and singer Barbara Streisand also dined at the restaurant last week, "but only left a small tip."

Americans are known for tipping generously while on holiday, although the exception to the rule is Facebook founder Mark Zuckerberg, who reportedly did not even spare a euro after a meal in Rome during his honeymoon a few years ago.

Italians, meanwhile, are among the least partial to giving tips while abroad, according to a survey by TripAdvisor.