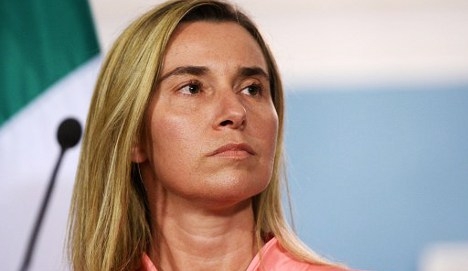 Italy’s Foreign Minister Federica Mogherini said that new sanctions against Russia will be decided by the European Commission on Friday. Photo: Jewel Samad/AFP

“The Commission will prepare the package [of new European sanctions on Russia] on Wednesday and the decision will be made on Friday,” Mogherini told the European Parliament.

Mogherini, who was named the EU’s new foreign policy chief on Saturday, added that the sanctions would be strengthened in four sectors, including defense, dual use goods and finance.

She also said that the “foreign fighters” in the Middle East are a “huge challenge” and a “priority security concern for Europe”. Around 50 Italians have been recruited by the Islamic State in Iraq and Syria (Isis), according to a report last week.

Mogherini’s chances of becoming the EU’s foreign policy chief were almost scuppered after detractors accused her of being too soft on Russia.

The criticism came after she visited Russian President Vladimir Putin in Moscow in early July.

But she has now taken a stronger stance, saying that a strategic partnership between the EU and Russia “is clearly over”.

“…and that was Moscow’s choice. We have a problem on the Ukrainian territory. We have a conflict, clearly," she added on Tuesday.