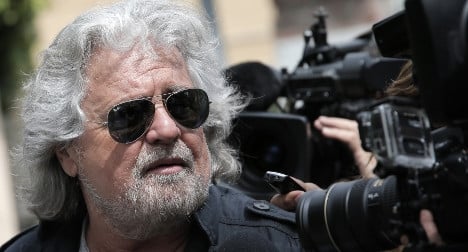 Grillo's comments come after police union Consap announced around 40 officers are being treated for tuberculosis (TB), after working with boat migrants in Italy.

In response to the news, Grillo criticized the government for an apparent lack of action. “[It’s] as if the return of diseases eradicated centuries ago isn’t a national problem,” he wrote on his blog.

“Let’s be open about it, inform the population that the police aren’t equipped even with the minimum preventative tools,” Grillo said.

The Five Star Movement (M5S) leader accused “chic radicals and the left” of not wanting to confront the problem and suggested adopting quarantine techniques used in 19th-century New York.

“When our great-grandparents landed in the US, land of the free, after having seen the statue with the torch lit up, they were immediately confined to quarantine on Ellis Island,” Grillo said.

But quarantine measures are by no means the best way to combat spread of the disease, Mario Raviglione, director of the Global TB Programme at the World Health Organization (WHO), told The Local.

"'Put everyone in quarantine' is unscientific and makes no sense," he said, adding that there is "no evidence that immigrants have provoked major outbreaks in Italy."

WHO show that in 2012 there were 3,142 people suffering from the lung disease in Italy, a number which remains relatively stable.

While the 40 police officers highlighted by Consap have been infected with TB, Raviglione described them as "carriers" who have no symptoms and cannot infect other people. A third of the world's population are carriers and can be cured within six months, while those who develop the disease can become non-contagious within two weeks and also cured in half a year.

Furthermore, Raviglione said the officers did not necessarily pick up TB while working with migrants.

"You don’t get infected helping people from a boat to the port…you need to be in a relatively dark room with closed doors to have a chance of being exposed," Raviglione said. If the police officers had not previously been tested for TB before working with migrants, they could have been carriers for years without knowing.

In its quest to eradicate the disease the WHO often has to deal with "alarmist reports in the media that create panic", Raviglione said. "A lot of education is necessary for the public and the politicians."

The Italian government must now put TB back on the agenda and develop a programme of services for high-risk groups, such as migrants who are vulnerable due to bad living conditions and poor general health.

"You cannot close the border and believe there is no TB coming in," Raviglione said. "It's prevention that counts, not quarantine."

Within Italy Grillo's comments were met with criticism by Cecile Kyenge, the country's former integration minister.