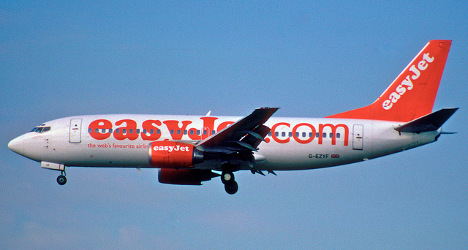 One passenger said that people were being "tossed like dolls" during the flight. File photo: Aero Icarus/Flickr

Passengers on an easyJet flight to Naples have spoken of their terror after the plane hit heavy turbulence, causing three of the six flight attendants to hit the ceiling, damaging the interior of the plane.

One flight attendant was knocked unconscious and another suffered a broken hip, according to MailOnline.

The plane, which was on its way to Naples’ Capodichino airport from London Gatwick, was forced to divert to Rome’s Fiumicino airport. The 154 passengers were then driven to Naples by coach.

Lucy Westbrooke, who was travelling to Naples with her husband David for their honeymoon said that the flight had been fine until an announcement saying that the plane would start its descent into Naples.

“Suddenly people were being thrown out of their seats and hitting their heads,” she said.

“Suitcases were being thrown out of the lockers overhead. There was just utter panic. People were screaming. There was a baby thrown up in the air and the mother was just beside herself.

“The crew didn’t really know what was going on. Some of the Italians on board were praying. One of the stewards came running down. David looked out of the window and saw the plane nosedive.”

David Westbrooke added that he had felt the plane nosedive and that it was the worst turbulence he had ever encountered.

In a tweet, another passenger, Santino Pierosanti, said that passengers were being "tossed like dolls" during the flight.

Most terrified I've ever been. Watched people hurt & tossed like dolls on my @easyJet flight to Naples http://t.co/ri2wIj8H4X @MailOnline

EasyJet has since apologized, saying “the safety and well being of our passengers and crew is easyJet’s highest priority and our pilots are highly trained to manage turbulence.”