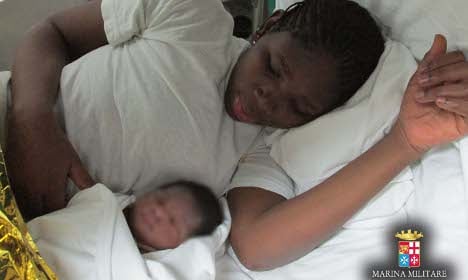 Baby Yambambi Yete was born on board the navy frigate, the Euro, on Saturday. Photo: Marina Militare

Italy's efforts to cope with the flow of migrants risking their lives to cross the Mediterranean in perilous conditions rarely give reason to warm the heart.

This weekend was the exception, however, as the crew of a navy frigate, the Euro, delivered a baby girl whose heavily pregnant mother was among a group of would-be immigrants rescued after their vessel got into difficulty off the southwest coast of Sicily.

Mother and daughter – who was named Yambambi Yete – were both reported to be doing fine after the on-board birth on Saturday.

The Euro docked Sunday in the southern port of Reggio Calabria where Yambambi and her young mother, who comes from Gambia, were taken to hospital for check-ups.

Technically the new arrival was born on Italian sovereign territory, which may increase the family's chances of being allowed to stay in Europe.

Many migrants trying to reach Italy from Africa, often in overcrowded, unseaworthy vessels operated by ruthless people traffickers, are fleeing strife in their countries of origin.

Yambambi and her mother were part of a group of more than 600 picked up by the Euro over this weekend – a consignment of human misery that include 24 minors and one paraplegic woman.

This year has seen a surge in the numbers attempting to make the hazardous crossing from north Africa, with more than 100,000 having reached Italy since the turn of the year and nearly 2,000 having perished in the attempt, according to the UN refugee body UNHCR.

The implosion of Libya and conflicts in Eritrea, Iraq, Syria and Somalia have helped drive the upward trend, putting major pressure on Italy's rapid-reaction rescue operation, "Mare Nostrum" ("Our Sea"), which the European Union has agreed to take over later this year.