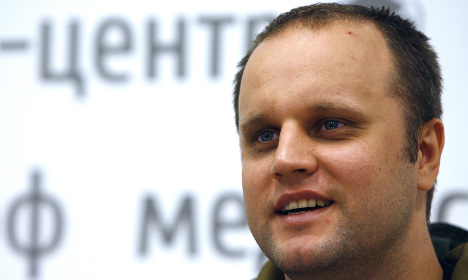 “An Italian fascist came a month ago to join us, the people who want Donetsk to be free,” Pavel Gubarev, leader of Donbass People's Militia, wrote on Facebook.

The unnamed Italian reportedly told the rebel leader he wanted to destroy pro-US “Ukrainian Nazis” in a bid to create “war against America”.

Gubarev is a key player among separatists, which in April seized government buildings in the eastern city of Donetsk and declared a “People’s Republic”.

He was arrested by Ukranian police earlier this year but has since been released. On Monday Gubarev addressed journalists at a press conference in Russia, close to the border with Ukraine.

When contacted by The Local, the Italian foreign ministry said it was unable to comment on whether Italians were aiding the rebels in Ukraine.

Earlier this summer two Spaniards announced they had flown to Ukraine to join militants fighting for the Donetsk People's Republic (DPR). Ángel, 22, travelled to Ukraine to “defend civil people”, along with 27-year-old Rafael Muñoz Perez.

French “officers” are also working alongside pro-Russian rebels, according to the DPR’s president, Alexandre Zakhartchenko.

“They are specialists ready to fight with us," Zakhartchenko said last month, in addition to “Serbs and Swiss” militants.

Fighting against them is a band of Swedes, who have joined a task force established by the Ukrainian government.

A neo-Nazi is one of four Swedes to have joined Azov, a force separated from the national army and directed by ultra-nationalists. The Ukrainian government has denied there are any foreign fighters in the unit.