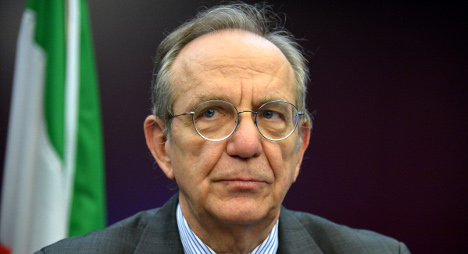 "There is a dearth of investment in Europe and this is the reason for weak growth," said Italian Finance Minister Pier Carlo Padoan, who headed a meeting of European Union finance ministers in Milan on Saturday.

After years of a German-led push to slash debt-plagued government budgets, the possible return to recession in the EU has sparked calls for more spending to counteract the anti-growth effects of austerity.

"We managed to create a unified atmosphere. Things are not black and white where you have to choose between investment and fiscal consolidation," said European Economic Affairs Commissioner Jyrki Katainen, usually a hawk on the dangers of government over-spending.

"If you spend public money wisely. . . (in research and innovation) it creates a lot of welfare for citizens," he said.

The situation is increasingly worrying, officials said, with ECB Vice President Vitor Constancio warning that investment and growth levels in the EU were still behind 2007, pre-crisis levels.

"In the 1930s, it took quicker to get back to 1930 growth rate," Constancio said, adding that it was the urgency of the situation that pushed the European Central Bank to cut its rate and announce a new bond-buying programme earlier in the week.

Several options for a Europe-wide boost in investment are on the table, none yet fully confirmed or with financing in place.

The situation is made even more complicated with most EU governments still running deficits, Katainen said.

Jean-Claude Juncker, who takes over as head of the European Commission in November, has called for a 300-billion-euro investment plan to be gathered from a variety of sources, both public and private.

Poland meanwhile has called on the EU to spend about €700 billion over the next five years and help lift a struggling Europe that is "strangling itself unnecessarily," Polish Finance Minister Mateusz Szczurek said on Thursday.

At heart of the discussions is the EU's European Investment Bank, often referred to as a lending "sleeping beauty", which France and Germany jointly called to take a bolder place in financing the European economy.

Another possibility is so-called project bonds, government-backed loans for big investment projects that would benefit all 28 EU member states.