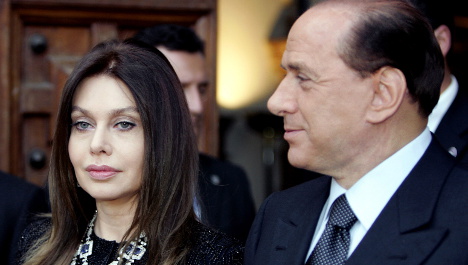 A court initially awarded Lario €3 million a month in December 2012 but the amount was subsequently reduced to €1.4 million after an appeal by the scandal-tainted tycoon.

In the latest appeal by Lario, who was married to the ex-prime minister for more than two decades, the 58-year-old will see her alimony payments cut to €2 million a month, Corriere della Sera reported.

The former actress, who has three children with Berlusconi, has now been ordered to pay back €36 million, a third of the amount she has received over the past three years.

However, Lario, formerly Miriam Bartolini, could still take her case to the Court of Cassation, Italy’s highest appeals court, the paper said.

Berlusconi, who was previously married to Carla Elvira Dall'Oglio, wed Lario in 1990 and the couple stayed married for 22 years.

Lario announced her separation from Berlusconi in May 2009, saying in an open letter to the media that she could not "remain with a man who cavorts with minors."

Their divorce was finalized in February this year.

Berlusconi, 77, is currently in a relationship with 29-year-old Francesca Pascale, a former showgirl.