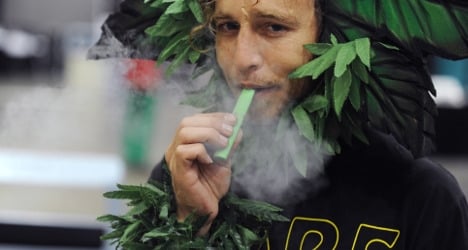 The study found that almost one in four Italian teenagers between the ages of 15 and 19 had tried cannabis in the past year. Photo: Robyn Beck/AFP

The annual study, which was conducted by the Department of Anti-drug Policy based on 31,661 students, found that 23,46 percent of teenagers between the ages of 15 and 19 had tried cannabis in the past year.

This figure shows a rise of two percentage points since 2013 when that number was 21.56 percent, La Stampa reported.

Consumption of cannabis across the population was also found to have increased.

Citing data from the analysis of sewage in 17 Italian cities, the report found there to be a 10.96 percent increase in the concentration of cannabis.

The concentration of other drugs, however, remained stable.

While recreational consumption of cannabis is illegal in Italy, the use of marijuana continues to gain support in Italy.

Earlier this month, the Italian government announced plans to produce medical marijuana in a military factory in Florence.

The study also looked at gambling addiction among Italians, which was found to have increased significantly since 2012.

The majority were men (83.2 percent), with the highest number seeking treatment in the northern regions of Lombardy and Veneto.

The report also found that young people are being increasingly drawn towards gambling, accounting for 3.8 percent of gambling addicts.