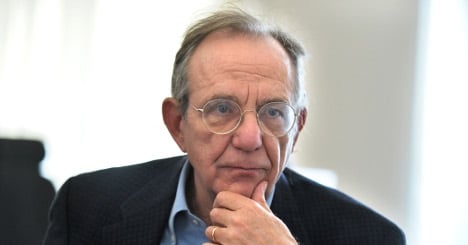 As Prime Minister Matteo Renzi discussed his ambitious 1,000-day reform plan in parliament on Tuesday, Padoan told Germany’s Handeslblatt newspaper that “Italy has completed much more than is recognized,” according to a report on Ansa.

"I was surprised when respectable commentators reproached us for producing only announcements," he said.

"We have a huge programme of reforms, perhaps too big. But we are convinced that the reforms will produce results."

The plans, which includes a revamp of labour laws, taxation and the education system, is designed to free Italy, which slipped back into recession in the second quarter, from the dead of institutional inertia and lay the foundations for a renaissance of the moribund economy.

But progress has so far been slow.

Electoral reform proposals (aimed at producing governments with strong majorities) and an ambitious plan to strip the powerful second chamber of parliament, the Senate, of its ability to block and delay legislation have also advanced, although they remain far from being enacted.

Meanwhile, moves which would make it much easier for companies to hire and fire have been shelved until next year at the earliest.

Renzi said on Tuesday that the 1,000-day reform plan was Italy's "last chance" to make up for "wasted time" and that he was prepared to lose popularity to see the reforms implemented.