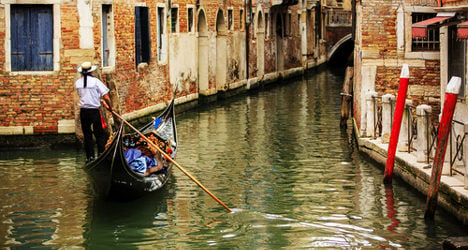 This is not the gondolier in the story. Gondolier photo: Shutterstock

Published on the Facebook page for the site www.Venessia.com, the photo shows a gondolier with his face blacked out who appears to be relieving himself by a doorway.

The man was spotted near Calle Larga XXII Marzo, an area famed for some of the city’s most important monuments and upmarket designer shops, Corriere della Sera reported.

Since it was posted on Tuesday the photo has sparked a flurry of indignant comments from Facebook users.

“And everyone always says that the only rude ones are the tourists,” commented Chiaretta Cogo on the Facebook page. “Venetians are all good and innocent….”

Other users questioned why the man’s face had been blacked out while photos of tourists behaving badly in the city were easily identifiable. “I also want to know why the gondolier has his face covered while poor people, immigrants or tourists don’t… is it a matter of income? Is it a matter of social class?” asks Orso Partecipazio.

Meanwhile, others have called for the gondolier to be identified and published for the “shameful” act.

In August, Venetians were outraged by a photo which appeared to show two tourists using a rubbish bin as a toilet in the Marziana area of the city.