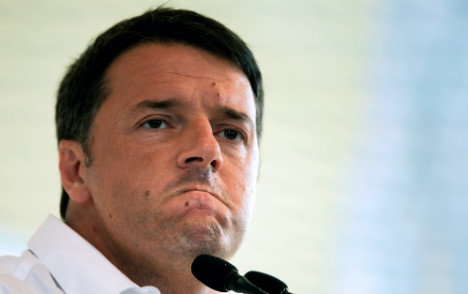 News broke earlier this week that Tiziano Renzi was under investigation as part of a probe into a newspaper distribution and advertising firm he owned before it was dissolved.

Italian media reports said investigators were also looking into the sale of a branch of the firm owned by his wife and sons — including Matteo.

The Corriere della Sera on Saturday pointed to the premier's close friendship with the head of a co-operative bank which it said gave the company a fat loan in 2010, despite signs it was already in trouble.

"The news reports which paint me as a crook are based on the collapse of a company which I had sold, and which went bankrupt three years and a few days after I stepped down as managing director," Tiziano Renzi said in a letter to colleagues and friends published by the Repubblica daily.

"You have not been dealing with a bandit," he said.

The president of the Tuscany region, Enrico Rossi, suggested the media interest in the case may have more to do with young reformer Matteo Renzi's attempts to shake up the system than his father's possible guilt.

He said notice of the investigation dated back six months. "So I ask myself, has it perhaps become news today because the economic and media powers have decided that Renzi needs to be bombarded for a bit because he has pissed someone off?"

The prime minister is embroiled in a fierce row with trade unionists over reforms to the labour laws and is also struggling to deal with rebellion from among the left-wing of his party, as well as tensions over his bid to reform the justice system.