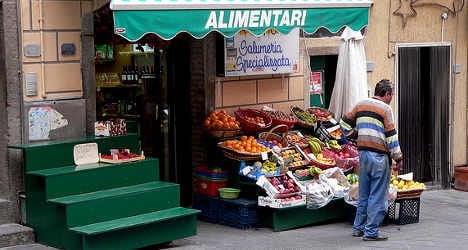 Bankruptcies in Italy rose 14.3 percent in the second quarter of this year. Photo: Lee Coursey

A total of 4,241 businesses closed during the quarter, bringing the number of failed businesses in the first half of this year to 8,120, data from the Milan-based research agency, Cerved, showed.

Gianandrea De Bernardis, the CEO of Cerved, was quoted by Ansa as saying that the new recession, the third since 2008, was "pushing companies out of the market that had successfully overcome the first phase of the crisis and are now paying the price both of the credit crunch and of demand that has been stagnant for too long."

De Bernardis added that Italy's small and medium-sized businesses were going through a "very delicate period".

The bankruptcies affected businesses across Italy, with the lowest rate of closures occurring in the north-east.

Meanwhile, the number of small businesses owned by immigrants surged 44 percent between April and June as they snapped up failed Italian firms at bargain prices, according to figures last week.

A total of 325,000 small businesses in Italy are owned by non-Europeans, the figures from the Unioncamere and Infocamere chambers of commerce revealed.

Indra Perera, the chief of the Rome unit of the National Confederation of Artisans and Small and Medium-sized Enterprises (CNA), told The Local that the entrepreneurs were able to take advantage of Italy's recession and buy shuttered businesses at a low price.