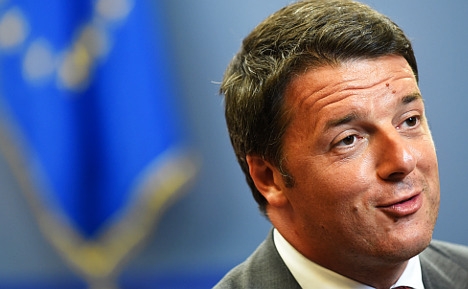 After speaking to 150 Italian entrepreneurs on Monday, Renzi went on to meet the world’s leading tech chiefs at Twitter, Google and Yahoo! and visit an Italian school.

“Renzi had so many stops planned for a whirlwind 48-hours in the Bay Area that he looks like he’s running for office,” San Francisco Gate wrote.

“Not only is he meeting with more tech CEOs than President Obama does during one of his fundraising visits to the Bay Area, Renzi is doing something Obama doesn’t during his visits here: Meet with non-techies and others who don’t write a fundraising check to be in his presence,” the newspaper said.

Renzi is the first Italian prime minister to visit California since 1982, Corriere della Sera reported, nine years before the World Wide Web was introduced and 15 years before Google was founded.

Now Silicon Valley boasts around 5,000 Italian tech entrepreneurs, according to media reports. Speaking to many of the business owners, Renzi called on them to “change the world” as he changed Italy.

“I won’t lecture you about coming back to Italy. I ask you to go forward and we will do everything to change Italy, make it a more simple country, with a different jobs market, with a slimmed down political class,” he was quoted in La Repubblica as saying.

Renzi described San Francisco as the “capital of the future” and said Italy faced a challenge of transforming its own “extraordinarily beautiful cities”.

Following his trip to California, the prime minister will attend the UN’s first climate conference in New York. Renzi has also scheduled a visit on Friday to the newly-merged Fiat Chrysler headquarters in Detroit.