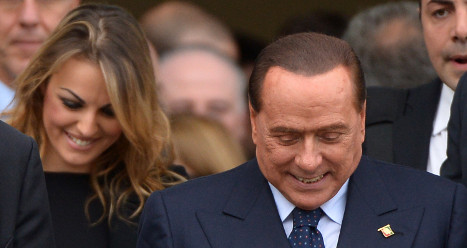 Francesca Pascale, who last year said she suffered “serious defamation” after a Bulgarian actress claimed the pair had a lesbian love affair, is a guest of honour at the closing party of Rome’s Gay Village, a three-month long cultural event, on Saturday night.

“If only he could come too,” Pascale said of her 77-year-old fiancé during the interview with Radio Capital.

“He’s a liberal…his Forza Italia party will soon set up a unit for civil rights.”

Until he got together with Pascale, 29, Berlusconi was better known for his anti-gay gaffes than his support of the gay community.

But in an apparent turnaround in late June, he said: “The [fight] for civil rights for homosexuals is a fight that in a truly modern and democratic country should be everyone's responsibility.”

The statement came the same day Pascale signed up as a member of Italy’s main gay rights organization, Arcigay.

Pascale added that the battle for gay civil rights was not for personal reasons, but for "civilization", and is something she supported long before she became engaged to Berlusconi.

Dudù Berlusconi, who has over 4,000 ‘likes’ on his Facebook page, will not be attending the party tomorrow night.