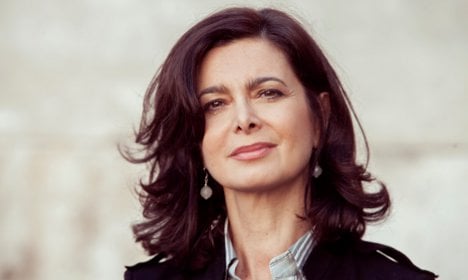 Speaking in Rome, Boldrini said the number of deaths this year were comparable to modern-day conflicts.

“There is a war underway in the Mediterranean,” she told journalists at the Foreign Press Association. “We are talking about a war, because during the last Gaza conflict around 2,000 people died.”

More than 2,500 people have drowned or been lost at sea trying to reach Europe, according to the UN’s refugee agency (UNHCR).

Migrants are forced by traffickers into overcrowded fishing boats which are often unfit for purpose. In some cases the vessels are deliberately sunk by people smugglers, as happened last week when around 500 people drowned off the coast of Libya.

Boldrini, who worked for the UNHCR for 15 years, said Europe needed to offer migrants an alternative to taking the perilous sea journey.

“If someone needs protection, they should be able to receive it from Europe without risking their life. Give people the option of claiming asylum in transit countries,” she said.

Increased cooperation with countries through which migrants travel, such as Libya, is a view recently aired by Cecilia Malmström, the EU’s home affairs commissioner.

But Boldrini said providing “an alternative to death at sea” lacked the necessary political will in Europe. “So we are limited to ‘Mare Nostrum’ [‘Our Sea’], which is good but it’s not the solution,” she said, of the Italian government’s operation to save migrants.

Mare Nostrum was launched last October following two shipwrecks off the coast of Italy, which left around 400 people dead, and this year alone has helped 135,000 migrants ashore.

The operation was described by Boldrini as “a medicine” to an ongoing “illness”, stemming from unstable and war-torn states such as Eritrea and Syria. “We used to speak of ‘mixed flows’ of economic migrants and asylum-seekers [to Europe]. Now for the most part it’s people who don’t have a choice,” she said.

Malmström in August announced a new EU initiative to replace Mare Nostrum, after the Italian government for months pleading for greater support.

“Frontex Plus”, named after the EU’s border control agency, is due to be launched by the end of November and bring together European and Italian sea missions.

But Boldrini on Friday warned that, as it stands, Frontex is a monitoring agency that doesn’t have sea rescue in its mandate.

“I am very pleased that there is a sense of responsibility among countries that support Frontex and invest in it,” she said. “[But] if Frontex is the European response to deaths at sea, its mandate must include rescue.”